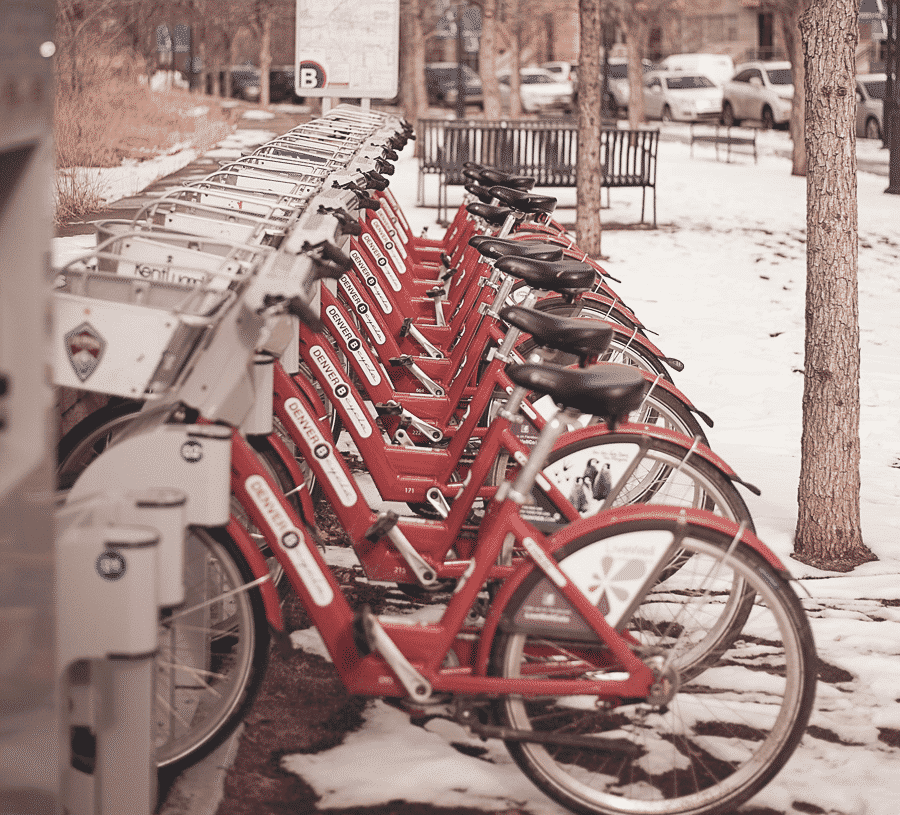 Every personal finance nerd knows that biking is one of the best modes of transportation out there. In addition to just being fun to do, you also get three things from biking that you really can’t get from any other mode of transportation – speed in getting from place to place, huge cost savings, and, of course, health benefits from actually using your own body power to propel yourself forward. And I didn’t even mention the awesome feeling you get when you zoom past a bunch of cars that are stuck in traffic!

At last count, there were 125 bike share systems in the United States of varying sizes and more cities are talking about adding or expanding their bike share systems. It seems like cities are starting to understand the infrastructure and health benefits these bike share systems provide. People can get around town without having to own their own bike. Or they can use the bike as an additional mode of public transportation.

Despite how awesome bike share systems are, when I talk to a lot of people about bike share, most remark that they are a cool thing, but that they don’t use them regularly. I’m always surprised about this. People will use their cars almost every day or even take a bus every day. But biking as a mode of public transportation doesn’t seem as obvious.

I’ve always maintained that one of the issues with mass transit is the barriers to entry that come with them. There’s general friction involved when a person unfamiliar with mass transit starts trying to take the bus or train to get around.

Take your typical bus system for example. Any new bus user knows how intimidating taking a bus for the first time can be. It’s not always clear where the bus is going. New people using a bus aren’t sure how much the ride costs or how to pay for the ride. And sometimes you don’t know where to sit or stand. These barriers often stop people from taking the bus. Why deal with the hassle if I can just play it safe and use my car?

Let’s look at a typical bike-share pricing guide that I found online: 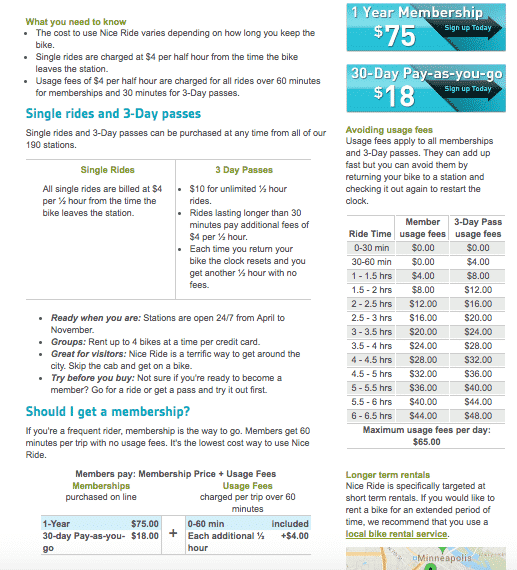 What the heck am I looking at? There are so many numbers and dollar amounts. And I don’t know about you, but just looking at this page, I have absolutely no idea how much it’ll actually cost me to use the bike share system. In a situation like this, I’d probably opt not to use it at all. It’s too confusing for me.

Don’t get scared off though because I’m going to tell you exactly how these bike share systems work. They’re really simple once you understand them!

For the most part, every bike share system works exactly the same. You can pay for varying levels of membership, from a single ride all the way to an annual membership. If you live in an area where there’s a docking station near you, I recommend you go for the annual pass. An annual membership typically costs between $75 and $100 per year, depending on the city you live in. At a cost of $8 to $12 per month, it’s a great bargain to always have access to a bike!

Signing up isn’t the issue for most people. The part that gets confusing is the usage fees. Let’s take a look at an example. 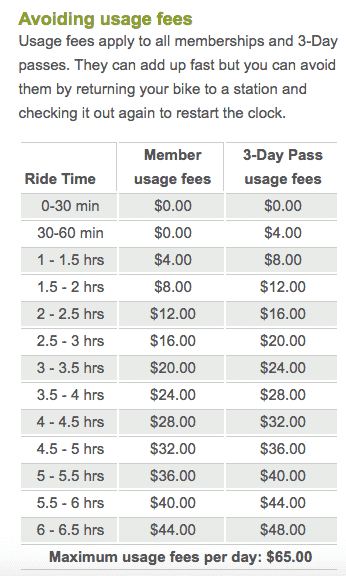 So here’s what you’re looking at. Each time you pull a bike out of a docking station, a “trip” begins. This means that using the above example, if you have a bike checked out for longer than 60 minutes, you would be charged $4.

In reality, you’ll never get charged those usage fees. Each time you return a bike to a docking station, the “trip” ends. When you check a bike out again, a new “trip” begins. Thus, in order to avoid any usage fees, all you have to do is make sure that you dock your bike in a docking station within the allotted time period. If you’re using a bike share system to commute, you’ll probably never run into this problem. And even if you’re using the bike to joy ride, just make sure you dock the bike regularly to avoid any usage fees.

The best part about using a bike share system – besides getting some exercise – is how cheap it can make your commute. Let’s take my own example here in the Twin Cities.  An annual bikeshare membership costs me $75 per year. Because of our harsh winters, our bike share system is only active from the beginning of April to the end of October – about 7 months. That’s a monthly cost of $10.71. Not much more than it costs you to sign up for Netflix.

When I was working in downtown Minneapolis, I biked to work every day. I live only a block away from a docking station and there was another docking station right outside of my office. If I’m commuting twice per day, five days per week, that’s about 40 rides per month.

How much does each trip cost me? 26 cents. No maintenance on my end. No worries about the bike getting stolen while I’m in the office. And that doesn’t include every other time I biked in the month!

Even in the most expensive cities, commuting using a bike share system costs you just a few cents per trip. In New York, for example, an annual membership costs $155 per year as of the date I wrote this. Let’s say you aren’t hardy enough to bike from November through February.  That still gives you 8 months per year in which to bike to work using New York’s bike share system at a cost of $19.37 per month. If you’re biking five days per week to and from work, you’re looking at an average cost of 48 cents per ride! Again, all without having to worry about maintenance or leaving your bike out in the rain or some thief cutting your lock and absconding with your precious bike.

I could go on forever about why you should sign up for your city’s bike share system. Here are just a few of those reasons:

Any other excuses though, I’d disagree with. A common complaint is that it’s too hot to bike to work most days. If that’s really the case, then put on different clothes, take a slow ride into work to avoid sweating, and change at the office. Or, don’t bike to work, but at least take the time to bike home from work. The point is, you can incorporate this form of transit into your life in some way.

Even though I also have my own bike, I still often find it faster for me to just bike using a bike share system. I don’t have to fumble around with locks or lug my bike out the door. Instead, I just walk over to the docking station, which happens to be situated a block from my house, grab a bike, and I’m on my way.

When you’re walking around town, you’ll see many more opportunities to hop on a bike as well. You won’t always have your own bike with you, but when you sign up for a bike share system, you’ll have hundreds of bikes all around the city at your disposal.

Yeah, I’m a huge bike share fanboy. I think it’s great for cities, great for people, and great for the planet. If you’ve ever seen these bikes around town, now you know why I think they’re so great.