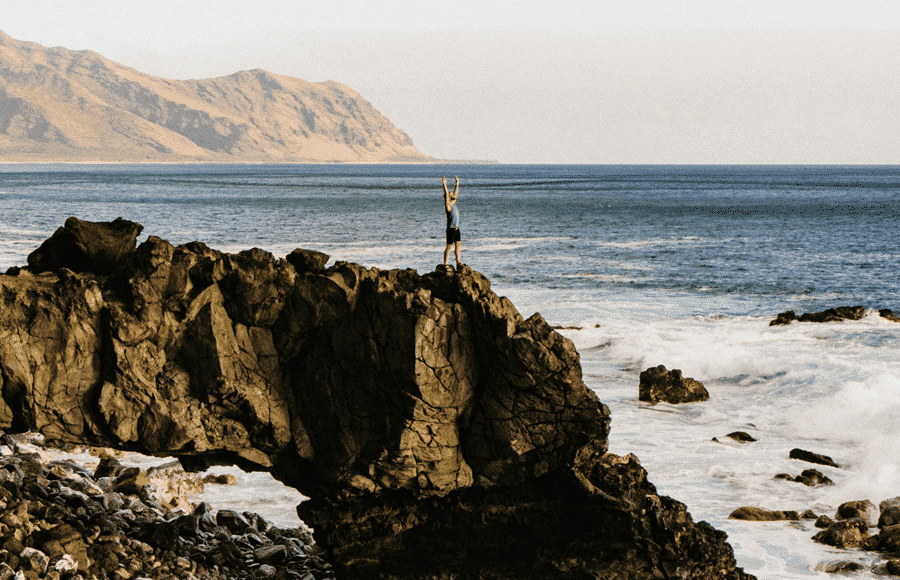 One of the best things I did coming out of law school was to pay off my student loans as fast as I could. Doing this gave me a ton of flexibility in the type of money I had to earn.

With my student loans gone, I didn’t need to work in a job earning a certain amount of money, all so that a portion of it could go out the door to some student loan company. And I could rest easy at night knowing that I didn’t have to keep paying for a piece of paper that I had earned years ago!

Interestingly, even though I knew how much in student loans I had paid off, I had never actually looked at what I had paid over those 2.5 years.

I thought it might be an interesting trip down memory lane to see this information, so a few weeks ago, I requested my payment history from my student loan servicing companies and took a look.

Background On My Student Loans

Before diving in, it’s best to look at how I ended up with these student loans in the first place. I went to a law school that gave me a 50% scholarship – a fairly smart move in my book since my other options were much more expensive and would have put me into far more debt. My goal when I entered law school was to keep my costs at a level that I thought would be manageable.

While the scholarship did help to lower my school costs, it still cost a lot in both tuition and living expenses for me to make it through those three years.

Here’s what my student loan balance looked like when I graduated from law school in May 2013:

I also had $552 in student loans remaining from my undergraduate days that I had failed to pay off. As a result, my total student loans when I graduated from law school equaled $87,052.

That’s a pretty decent amount of student loans for a 26-year old kid starting his first real job. Let’s get started paying them off!

I graduated from law school in May 2013 and started my first job in September 2013 at a large law firm in the Midwest.  Since I’d just graduated, I received a 6 month grace period and wasn’t required to make my first student loan payment until December 2013.

I don’t really remember why I did it, but I happened to make a few extra payments before my loans officially came due. This is what my 2013 student loan payments looked like: 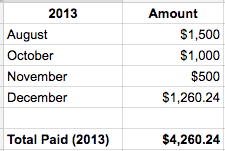 The thing that most people forget about student loans is that they continue to accrue interest while you’re in school. So when I made that first student loan payment in August 2013, here’s what it looked like:

Ouch! The $750 payment didn’t even touch any of the loan principal. I was basically throwing money away here.

My second payment of $750 on a different student loan did only slightly better.

Stupidly, though, I didn’t understand the concept of capitalization. For those of you who don’t know what that is, basically, once your student loans go into repayment, all of the unpaid interest that accrued during the years you were in school gets added into your principal and becomes your new loan amount unless you pay the interest off before it capitalizes. Remember that $750 payment I made on the one loan? Here’s what that loan looked like once it capitalized:

Do you see what just happened? My $12,000 student loan suddenly became a $13,682 student loan! Interest had been accruing on it during the three years I had been in law school and once the loan entered repayment, the unpaid interest got tacked right onto the principal! This was awful because I now had to pay back the capitalized interest AND all of the new interest that was accruing from that. And it wasn’t the only loan that capitalized either.  I had three other loans that capitalized, adding thousands to my principal.

I consider 2014 to be the first year I really started trying to pay off my student loans. As a first-year associate, I was making a yearly salary of $110,000, so I had the income to make a big dent on my loans. All I had to do was avoid that lawyer lifestyle trap that a lot of my colleagues fell into.

Here are the amounts I paid towards my student loans in 2014: 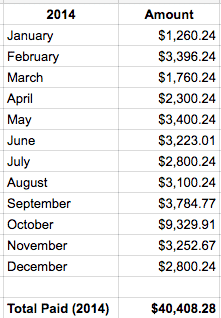 Wow! I knew I had paid a lot towards my loans, but I never really realized how much it was until I actually wrote it all down. Here’s a nifty chart showing my student loan payments in 2014: 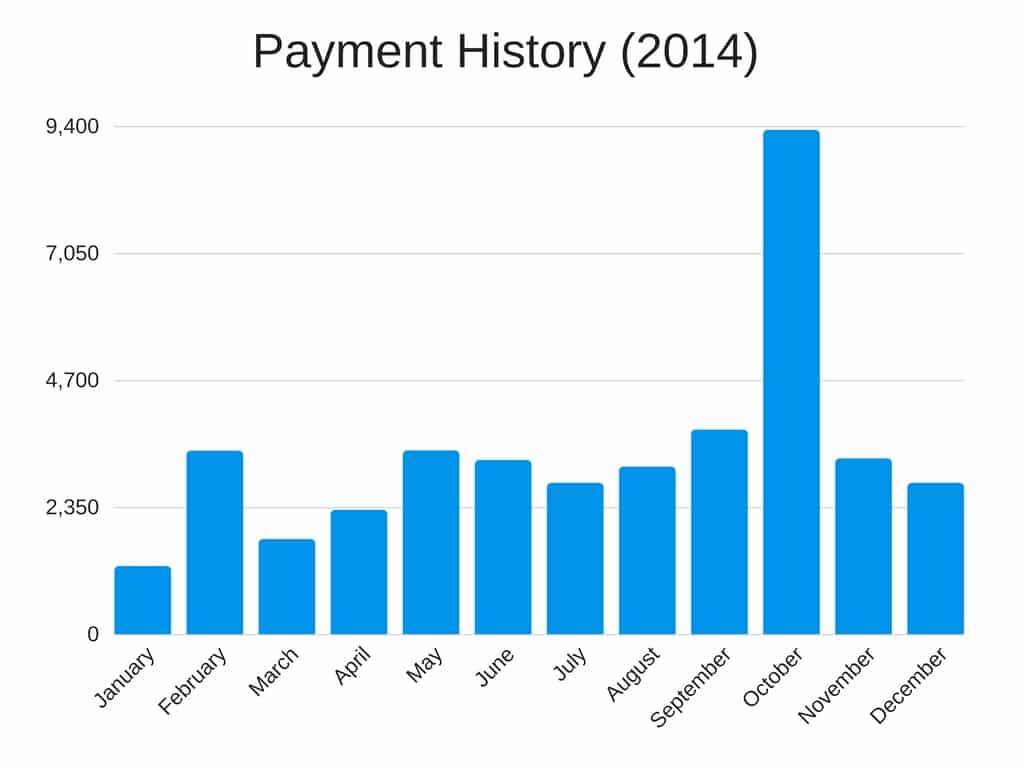 The thing that jumps out to me is that ridiculously huge payment I made in October. I had a fairly sizable emergency fund at that point, so my best guess is that I decided I didn’t need all of that money in cash and threw a bunch of it into student loans.

You’re also probably wondering why my payments jump around and seem to differ a lot each month. A lot of this had to do with me randomly throwing down extra payments whenever I saw my bank account getting too big. I wanted to avoid what I call Paycheck Complacency, so that’s why you see the random spikes and dips throughout the year. 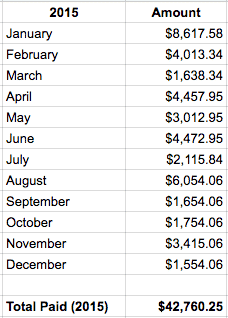 It looks like 2015 started off great. I pulled a bit more money from my emergency fund to start out of the year, which is why you see that really big spike early on. I’m not exactly sure why I did that, but my best guess is that I’d been listening to a bunch of Dave Ramsey and got really motivated to get that loan balance down some more. In any event, the money in my emergency fund wasn’t earning a ton, whereas paying down my debt was a guaranteed 6.8% return. 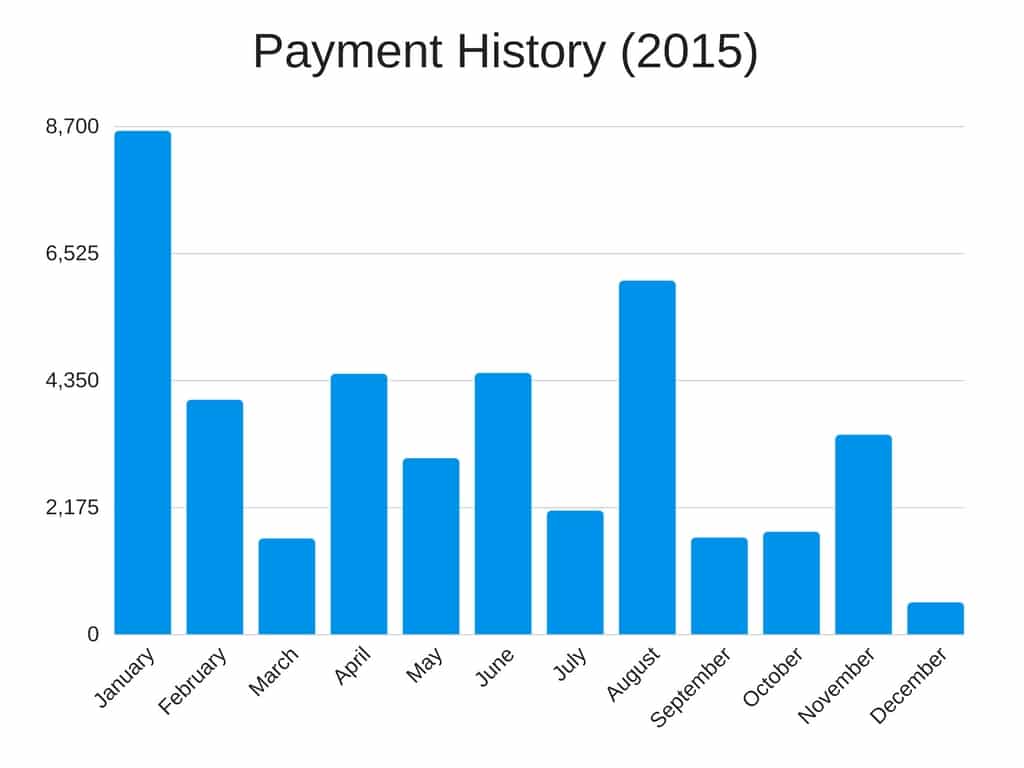 As you can see, my payments still jumped around in 2015.  I continued to pay extra as more money built up in my bank account.

Another big thing I did was to use my three-paycheck months to really toss a ton of money at my loans. I was paid bi-weekly (as many people are), so twice a year, I’d see a month with three paychecks. Since I was living fine on just two paychecks per month, each time a three paycheck month came around, I threw the entire third paycheck towards the student loans.

If you’re not sure about which company to refinance your loans with, a good option is to use a company that can search multiple student loan refinancing companies for you at the same time. These companies are basically like the Kayak or Priceline of student loan refinancing. You can run a search and all of the potential rates that you can get will show up for you in one spot.

The company that I recommend for this is Credible:

My advice is to refinance your student loans with SoFi first – that way you’ll gain access to all of the free SoFi member events (remember, you can still go to these events even after you’ve paid off your SoFi loan).

Or if you’re like me, you could be crazy and refinance your loans with basically every company. That’s pretty much what I did, and while it wasn’t necessary, it did give me access to a lot of signup bonuses.

If you’re confused about refinancing, make sure to check out my post about my student loan refinancing experience, where I walk through exactly what I did when I refinanced my student loans. You can read that post here: My Student Loan Refinancing Experience. 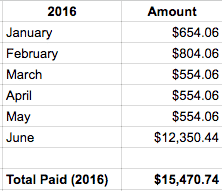 I started off 2016 with another raise, this time to $125,000 per year. Again, I had a great income to pay off these loans fast, assuming I didn’t fall into the lawyer trap.

So what the heck happened here?  Why was I paying so little for those first 5 months and then suddenly dropping this huge bomb at the end?

I like to think of 2016 as a year of transition. I was so close to the finish line and knew I was going to try to get out of that big law firm job as soon as possible. The interest rate on my remaining student loans was also still very low. Even with interest rate hikes, my variable rate was still in the 2% range and never got higher than 2.17%. Since my rates were so low, I decided that just to be safe, instead of paying extra to my loans, I’d pay the extra to myself, just in case I needed the money if I quit my job.

Note the emphasis on “just in case.”  The key was that this money was earmarked for student loan payments or in case something drastic happened that resulted in me needing the money.  I didn’t spend that money on something else!

In June, I got myself a new gig in state government and decided to go ahead and take all of the cash I had on hand and wipe all the debt out. That’s why you see that big $12,000+ payment in June.

How Much Did My Student Loans Cost?

Could I have made more money by investing this money instead of paying down my student loans? Perhaps. But, remember, personal finance is personal. I valued the flexibility in knowing that a certain portion of my paycheck didn’t have to go out the door for money I borrowed a long time ago. And it’s amazing to not have to think about one more bill each month.

One caveat. I know that the amounts I paid aren’t something that a lot of people can do. There’s no secret to paying off student loans beyond spending less than you earn, and using the rest to pay off your loans. This post shows you exactly what you need to pay if you want to do what I did.

If you’re struggling with a ton of debt and not enough income, then you need to figure out a way to raise your income. Pick up a side hustle if you need it. Just don’t give up and think that you have no options. There’s a huge world out there and you have more options than you think.

It was really interesting to see how much I had to pay in order to wipe out my student loans. If you’ve never done this exercise before, I say give it a shot. See how much you’ve paid on your loans. I bet you’ll be surprised (and shocked) at the number you see.