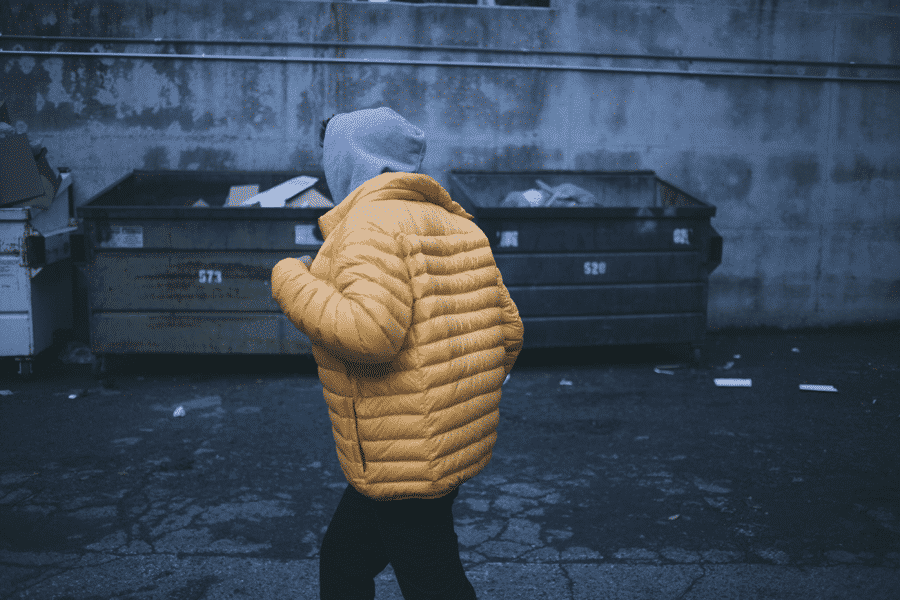 This is a story about our unorthodox adventures in side hustling by selling trash finds. It all started when my wife and I moved into a luxury apartment building in early 2015. We’d received a deal from a guy who wanted us to take over his lease, and as a result, we were able to move into a luxury building paying less rent compared to what we had previously been paying in our “normal” apartment. It was a deal too good for us to pass up.

After getting our keys from the leasing office, we walked out of the building through the garage. And there I saw it – a perfectly good coffee table sitting right by the dumpster. On a whim, I grabbed it and listed it up for sale on Craigslist. It sold just a day later to a young couple for $25. In my mind, it felt as if I had just found $25 in the trash.

I initially thought this sweet trash find was a one-off thing. Probably someone moving out that didn’t want to take their coffee table with them and was too lazy to give it away. I really didn’t expect more of this type of trash to appear.

From that point on, we were hooked. The lure of the trash drew us in, and almost every evening, we would saunter our way down to the garage of our new luxury apartment building and peruse through the trash. What sort of treasures was out there? We were amazed at what we found.

Entire bed frames. Expensive bar stools. TV Stands. We once found an entire bag of clothes in perfect condition, with the tags on most of the clothes. Another time, we literally found a mug with around $5 of change in it.

People in this luxury apartment were tossing out tons of awesome stuff!

*I’ll note that when I say dumpster, this wasn’t literally a trash dumpster. Instead, this was a recycling dumpster, so there wasn’t really any gross trash in it. It was mainly just cardboard, paper, and cans.

And thus began my funniest side hustle to date – selling trash finds. If you don’t think there’s money to be made selling trash, you should check out some of the blogs out there in which folks are making significant money selling their trash finds.  A few blogs that come to mind include scavengerlife.com and garbagefinds.com.

For myself, I obviously wasn’t trying to make a full time living selling trash – I don’t have the time or inclination to do that. But after that first $25 sale, I thought, maybe there was some money to be made here. Sure, $25 in itself wasn’t a ton of money. But if we were able to find trash consistently, a few bucks here and there would add up, right? And since this was trash, it cost me nothing to acquire my wares. I could sell my trash finds at any price point I wanted and reap a complete profit.

How Much We Made Selling Trash Finds

I had no intention of starting a blog or documenting any of the interesting things I was doing when I began my trash finding adventure. But I did happen to keep a spreadsheet of my trash earnings from that dumpster. Unfortunately, I didn’t write down what type of trash it was that I sold, but you can still get an idea of the quality of goods I was finding from the below spreadsheet: 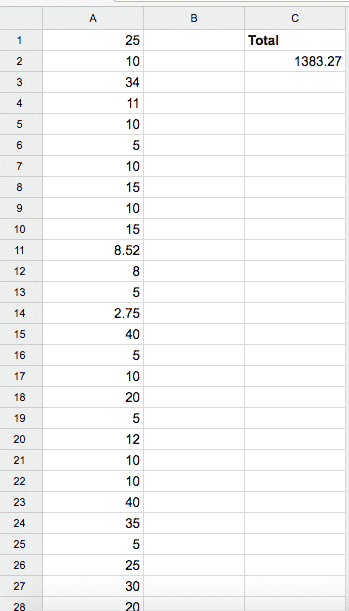 On the left is the price at which I sold each trash find, starting with that first $25 coffee table that started this whole trash finding adventure. Unfortunately, the spreadsheet is really long and I couldn’t figure out how to put the entire spreadsheet into a single screenshot. It goes down 76 rows, so that means I sold 76 things from that dumpster.

The part of the spreadsheet that you can see does give you an idea of the type of trash finds we were selling. From that single dumpster in our apartment building, we managed to sell $1383.27 worth of trash! We lived in that building from April 2015 to January 2016.

One thing you can probably notice is that we weren’t commanding huge dollar amounts for a lot of this stuff (which is probably part of the reason that people felt these items could just be thrown away). What we lacked in price though, we made up for in volume. We were pulling trash out of that dumpster pretty regularly and selling things quickly.  It was a lot like saving money in a way. A little bit here, a little bit there, and before you know it, you have a huge chunk of money just sitting there.

A lot of people thought that it wasn’t worth our time to list things up that weren’t worth much. My thinking was this: if I saw $5 or $10 on the sidewalk, would I pick it up? That’s what it felt like to me – as if someone had just left $5 or $10 on the ground for me to pick up.

Where To Sell Your Trash Finds

The great thing about technology today is that you don’t need to hold a garage sale to sell stuff.  You can instead just take a few pictures, list it up, and people will come from all over to pick up your trash.  We primarily sold our trash finds using Craigslist and another app called OfferUp. This was back in 2016 – today I’d recommend using Facebook Marketplace to sell most of your trash finds.

Related: The Best Apps And Websites For Selling Your Stuff

The process to list things for sale is pretty straightforward.  You take a few good pictures, write up a description of the item, and post it up for sale.

Back then, I had a pretty even split of sales between Craiglist and OfferUp, with a slight edge to Craigslist. If an item was smaller, I’d also list it up on eBay to try to generate additional sales.  If an item never sold, I would eventually donate it to GoodWill. These days, I sell almost all of my trash finds on Facebook Marketplace simply because of how many users they have.

Some Of The Things We Found In The Trash

Here are a few examples of some of the sweet stuff we found in the trash. Take this Keurig that we found. It was fully functioning and still in its box. After testing it to make sure it worked, I listed it up on Craiglist for $40. It sold within a day. 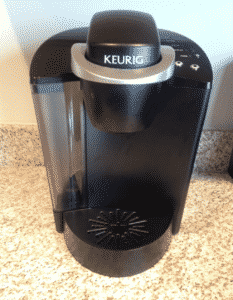 Or another great find was these four bar stools that were sitting by the trash. They were a little wobbly, but after tightening some screws, they were basically as good as new. I listed them up for $160 and sold them within a few days. 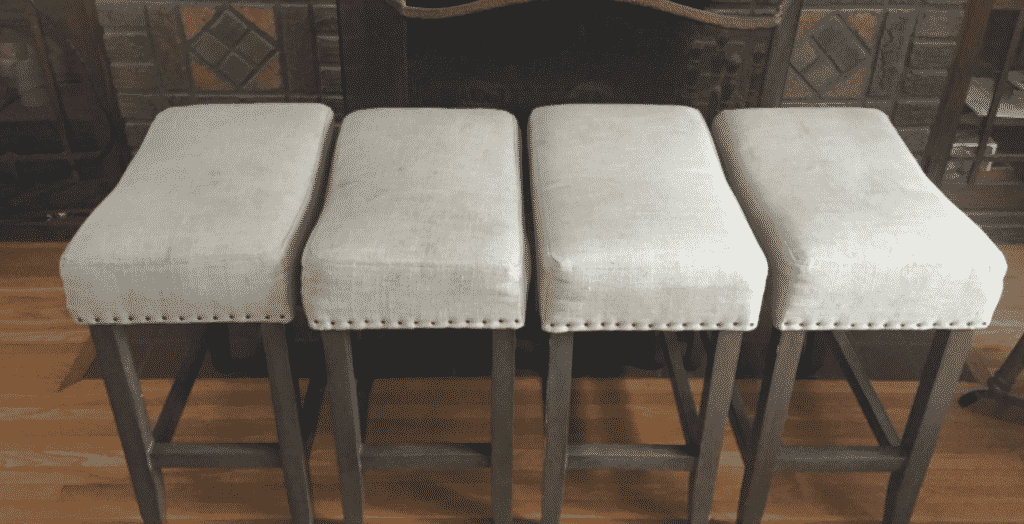 The ultimate point is that people throw out some amazing stuff. Sometimes they just don’t know that their things have value. Other times, they’re just in a hurry and don’t have time. Their loss is your gain.

Trash Finds Continue Even After We Moved Out

We moved out of that apartment at the beginning of 2016, and with it, our access to that awesome trash disappeared.  But if anyone reads my side hustle reports, you’ll notice that I still seem to bring in around $50 per month from trash finds. That’s because we moved into a college neighborhood and college kids throw away furniture like crazy! We have a dog, so we’re often walking around the neighborhood. And when we do, we keep our eyes open for anything that looks like it could be sold. It’s not as readily available as that magic dumpster, but there’s still trash to be found out there.

My wife has a liking for office chairs for some reason. I’ve personally never thought of office chairs as a good trash find, but she seems to think they are. She also has a big thing for finding Sterilite storage containers, which surprisingly, always sell quickly. I always grab these type of items when I see them in the trash.

For myself, the things I like to grab are TV stands and side tables.  I find these quick and easy to list up, and they sell quickly.

What I Learned From Selling Trash

I have a couple of things that I learned since I’ve started selling our trash finds. First, there are more ways to make extra money out there than you think. You just have to think outside the box. I literally made over $1,300 from things I found in a single dumpster. If I told you that there was $1,000 in a dumpster, do you think you would go and take a peek in it? I know I would.

Second, I’ve learned people are wasteful. This dumpster was not an anomaly. We live in a transient society and people are constantly moving all the time. If you live in an apartment (and especially if you live in a nice apartment), find out where people dump their furniture when they move out. I guarantee there is some spot in your building where trash is building up when people move out. Even after we moved out of that apartment, we are still regularly finding trash on the street. People are lazy. They throw things away, rather than sell them or donate them. I know I’ve done that before too.

Finally, there’s more demand for things than you think. I think we all live in our own bubble and assume that everyone wants the same things as us. Since beginning this trash finding adventure, I’ve sold things that I never thought anyone would buy. Early on, for example, I saw a bunch of used Voss bottles in the trash. If you don’t know what Voss water is, it’s fancy water that comes in a really cool looking bottle. I thought that these might be worth something, so I picked them up and listed them up on eBay. They sold right away. This was literally trash, but someone wanted it.

Here are my general tips for everyone who might be interested in flipping their trash finds and making a few extra bucks, as I did: