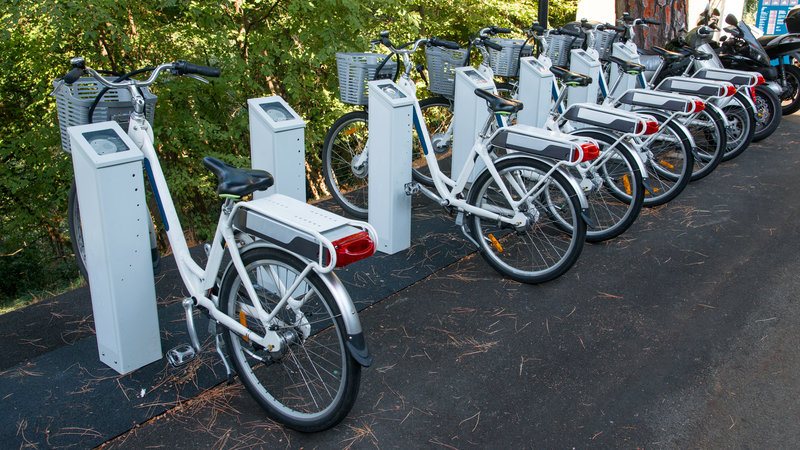 One of the things that really excites me about the future of cities and transportation is the rise of micromobility and specifically, this wave of electric micromobility that we’ve been seeing in urban areas.

I’ve been a fan of micromobility even before I knew that there was a term for it. Years ago, I wrote a post about how you could save over $100,000 simply by incorporating micromobility options into your daily commute. My thought was that people could reduce their car reliance by using what I then called “alternative” forms of non-car based transportation to get from their home to a larger mass transit network. These alternative forms of non-car based transportation included using things like bikeshare systems, kick scooters, and skateboards to shorten the distances between home and transit.

I never really thought of these modes of transport as real car replacements for your average person. I’m a bike commuter, so I know that it’s possible to commute without using a car. But I also know that most people simply aren’t going to move around using their own power, especially if they have to risk sweating in order to do it (for whatever reason, it seems like people are deathly afraid of sweat).

Just a few years after I wrote that post, however, the world seems very different. You’ll notice that in that old post, I never once mentioned electric micromobility options, mainly because I had very little interaction with these types of vehicles. E-bikes and electric skateboards weren’t very prevalent yet – at least not where I lived. And I didn’t even know that electric scooters existed until they started popping up on city streets in 2018.

I think 2018 is the year that we’ll say electric micromobility started to hit the mainstream. We’ve seen ridiculous growth in these sort of vehicles and whether you like them or not, these shared electric, light-weight vehicles have introduced alternative, non-car based modes of transportation to tons of people who otherwise would never have even considered it.

A few years ago, I thought of micromobility as just a last-mile solution for most people – something to ultimately get you from your door to something else that would get you to your office. If I could just get a few people to bike, scoot, or skate their way to the bus or train instead of driving, that would be good enough for me.

But now? I think we’re looking at electric micromobility vehicles that can basically act as your primary method of transportation throughout an entire city – getting you to work, school, the grocery store, and everywhere else you need to go without breaking a sweat. This is the way people should be getting around.

Electric Micromobility – Can This Be What Pushes People To Non-Car Based Commuting?

I’ve been bike commuting for years and it’s something I’ve argued that most people can do. A 3-5 mile commute using a bike only takes 15 to 30 minutes to complete, and even on hot or cold days, I think most reasonably fit people can handle that commute.

At the same time though, I get it. Biking just isn’t something that most people are going to do. There are a lot of reasons for this. The infrastructure isn’t right. Or the climate isn’t right. Or whatever myriad of reasons people have to decide to hop into their car to go somewhere.

But honestly, if I had to pinpoint one thing more than anything else that leads people to choose their car over other modes of transportation, I think it has to do with the fact that people simply don’t want to get tired or sweaty when they move around.

The car is wildly inefficient as an urban mode of transport, requiring a ton of space to store it and using all of its energy to move the car, rather than the person inside the car. But, it does come with the benefit of getting you where you want to go without having to use any of your own energy.

Most people can commute 10 miles or less very easily using an electric bike or scooter. Depending on where you live, this could even be faster than using a car. And you can do this all with almost no physical work.

With all that said, I’ve been debating for a while about whether to buy some sort of electric micromobility vehicle. I’ve been riding electric scooters for free for a while now thanks to being a scooter charger. I’ve debated about buying my own electric scooter, but ultimately, I’ve decided to hold off on that since I usually have a free scooter I can use anyway.

What I’ve really been eyeing is an electric bike. And this past week, my wife and I finally pulled the trigger and bought one from RadPower, which she’s now been using to commute to work.

Her situation seemed pretty well-suited for an electric bike. It’s a 12-mile commute that goes entirely through bike trails. That’s a pretty long commute on a regular bike, generally taking her about an hour. On an electric bike, she’s been able to do this same commute in about 40 minutes while expending minimal energy. And she’s having a lot more fun getting to work.

Cutting down 24 miles per day of car commuting does lead to some real savings. I generally assume that operating a car costs about 50 cents per mile, so replacing that 24-mile round trip commute with 24 miles of e-biking should save us $12 per day of travel costs. Even if she only bikes to work 3 days a week for 28 weeks (April through October), that’s $1,008 she saves in a year. Her bike cost $1,500, which means it pays for itself in a year or two depending on how often she uses it instead of a car.

Meanwhile, maintenance costs on the e-bike should be much less compared to the cost of maintaining a car. I’ve learned from my own experience charging electric scooters that charging up a battery costs 5 cents or less. Regular tune-ups and maintenance don’t cost that much either. The battery will need to be replaced every couple of years, but even that cost isn’t that much when broken up over time (a new battery costs $550, but the RadPower website estimates that a battery should last 2.5 to 5 years depending on use).

And finally, while most people don’t think it, you do get health benefits from an e-bike, both physical and mental. This directly translates into monetary benefits for you that should dramatically outweigh the negative health impacts of driving in a car. Car commuting is isolating and stressful. E-biking is the opposite of that.

I Think The Future Is In Electric Micromobility

The interesting thing about electric micromobility options is that the initial costs are not very high, especially when you compare it to how much even your cheapest car costs.

An electric bike can cost from $1,500 to $3,000 – not cheap, but certainly much cheaper than any decent car would cost. You can find electric scooters for $500 or so that’ll easily get you to and from work on a daily basis. A friend of mine bought a Glion Electric Scooter that can get him 15 miles on a single charge – more than enough distance to get him to work or a store. Electric skateboards cost in the $1,000 range, which again, isn’t that much if you can replace your car commute with it.

These vehicles are starting to look more and more normal too. When I would scoot around last year, I’d often get looks because no one had ever seen an electric scooter before. But today, most people don’t even glance twice at me. It’s just become very normalized to fly around a city on some form of electric micromobility.

There’s always going to be a reason for cars, mainly to travel long distances, move kids, and/or haul big items. But most of the time, it seems like people aren’t using their cars for that reason. Instead, they’re going to work, or going to a restaurant, or meeting up with people somewhere and they don’t want to get tired or sweat at all.

With electric micromobility, you can get from place to place cheaply and efficiently without using any of your own energy. That seems like a gamechanger to me.