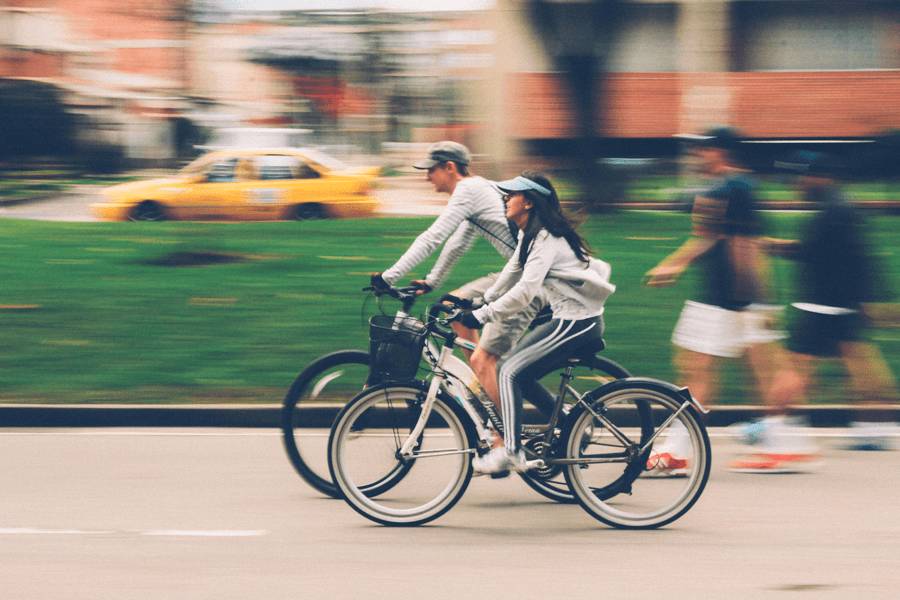 One of the nice things about starting my new job (don’t worry, more to come on this in a future post) is that I’ve been able to cut my bike commute down to a really comfortable distance. What was once an 8-mile, 45-minute bike ride to work has now been reduced to a 3-mile, 15-minute leisure cruise. It’s pretty nice.

When bike commuting becomes a normal part of your routine, you sort of forget that for most people, biking is something out of the ordinary. Even in Minneapolis – one of the most bike friendly cities in the US – biking as a mode of transportation isn’t normal. Just 5 percent of commuters here bike to work according to recent census data. When you look at where most people probably work (in a downtown area) and where many young professionals live (in cool, densely populated neighborhoods that aren’t very far from downtown), it seems like that percentage should be way higher.

I was recently reminded about how odd most people find bike commuting when I arrived for my first day of work at my new job (seriously, I will talk about this soon!). A perk of the new gig is that it comes with free parking in the large employee parking lot located across the street. When I arrived on that first day, the admin people asked me for my license plate and car model so that I could park my car in the lot. When I explained that I had biked to work and that I planned to continue to bike to work, they seemed pleasantly surprised. Who bikes to work, after all, especially when you get free parking!?

That’s not my style though. As we all probably know, driving to work, even with free parking, isn’t really free. There’s a real cost to it, one that can be worth thousands of dollars over the course of a decade in car costs and general health costs. In any event, I’ve been biking to work for too long. There’s no way I can stop now!

I think biking to work seems so normal to me because I’m surrounded by bike commuters. I live in a college neighborhood, so I see a lot of bike commuters in my daily life. Say what you will about college kids, but one thing most of them know how to do is to save money on transportation by using their own body power to get themselves to class.

You’re probably thinking that a short commute is unique to college kids, but in fact, it isn’t.  Take the example of my brother-in-law, who lives in the popular Northeast neighborhood of Minneapolis and works at a hospital downtown. 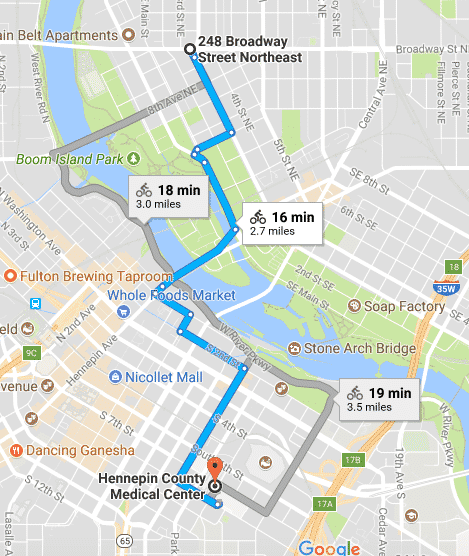 A mere three miles and 16 minutes later, and he’s already at work. Even on the hottest or coldest days, anyone can survive a mere 16 minutes in the elements.

And his commute isn’t unique. His neighborhood is one of the most popular and densely populated neighborhoods in Minneapolis. A lot of young professionals should have a similar commute. In a perfect world, we’d see hundreds of people from his neighborhood hopping on a bike every morning to get to their jobs downtown.

If you think these really short distances aren’t realistic, here’s the commute for my best friend, who lives a little bit farther from downtown. Even at his distance, his commute by bike takes only 30-minutes. And that’s assuming he’s biking at the leisurely speed Google thinks he’s biking at (he’s not because he bikes faster than that). 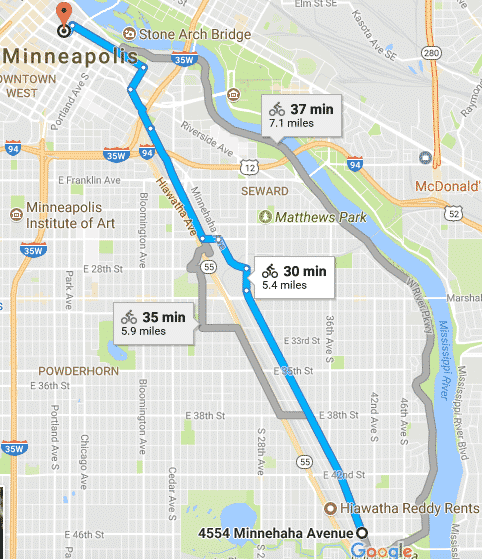 Just 30 minutes to go an entire five miles! And because he’s a smart dude and knows how to plan his routes, he can make that trip almost entirely on bike paths.

You Can Travel Really Far By Bike In Just 30 Minutes 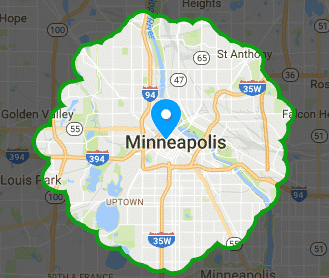 A 30-minute bike ride to downtown Minneapolis covers a massive area that includes pretty much all of the most densely populated neighborhoods in the city. Thus, most people won’t be biking 30-minutes. They’ll probably be biking 20 minutes or less. In a perfect world, we’d see thousands of people hopping on their bike each morning to get to work downtown.

Your Bike Commute Doesn’t Take Much Longer Than Driving

I think a lot of people I talk to underestimate just how far you can travel by bike and how fast you can do it without breaking a sweat. Bike commuting doesn’t have to be some thing where you speed into work as fast as you can and huff and puff your way into the office. You can do it slowly, and still get to where you need to go fast.  And you’ll never have to get frustrated by being stuck in bumper-to-bumper traffic.

My own commute is a great example of how efficient biking to work is. To get to my office by car takes 9 minutes from my house according to Google Maps. The same bike ride takes a mere 6 minutes longer. I don’t even change clothes to get to work – I just bike at a nice leisurely speed wearing my work clothes.

Even someone living farther away can make the ride into work at a speed just a little bit slower than a car. My best friend’s 5-mile bike ride, which takes him about 30 minutes, takes 15 minutes to drive by car. And that’s not including the time it would take him to park his car if he drove to work. If you assume it adds a minimum of 5 minutes or so to pull into the parking ramp and find a parking spot, biking only takes him 10 minutes or so longer. And in exchange, he saves potentially hundreds of thousands of dollars over the course of a decade and gets a nice, 30-minute ride into work.

The More You Bike, The Better You Get At It

The biggest thing people tell me is that they don’t feel safe doing it. I totally get that. As a person who bikes pretty regularly, I sometimes forget that not everyone bikes around all the time like I do.

But, like anything, biking is a skill. The more you do it, the better you get at it. My wife and I aren’t expert bikers by any means. But what we do know how to do is get from point A to point B while feeling safe and comfortable. If you know how to use Google Maps, you can probably find a route that gets you to where you want to go safely and efficiently.

Sweat is another problem that can be addressed by biking more often. When you start out biking, you’re going to be more out of shape. You’ll sweat more. But an interesting thing happens when you bike more. You’ll find that you’ll be in better shape and yes, you’ll sweat less. And even if it’s crazy hot, the solution is pretty simple. Either get your bike ride started earlier so that it’s cooler, or just wear something else to work and change when you get there. Problem solved.

So my challenge to you, grab your bike and see if you can make that bike ride to work. If you’re like most young professionals that I know, you probably don’t even live that far away from your office.

Take a look at the below video I took one day on my way home from work.

I don’t think there’s anything more satisfying than biking past all of that stuck traffic after a long day of work.