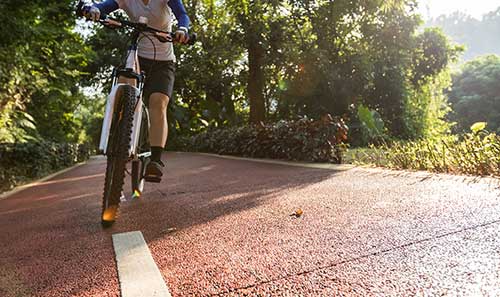 When I think about life-changing things I’ve bought over the years, the list is pretty small. A laptop. My first smartphone. The robot vacuum that’s saved me literally hundreds of hours of cleaning time. But perhaps the best thing I’ve ever bought has to be an ebike.

I bought my first ebike in 2019 shortly after returning from a week-long trip to Dallas. My wife was there to take her board exams and since I was newly self-employed, I tagged along to blog and try out my side hustles in another city.

After she was done with her exams, we spent a day exploring the city on a Jump Bike – one of those electric bikeshare systems that you can rent using your phone. We ended up biking about 9 or 10 miles, saw a huge swath of the city, and didn’t even break a sweat. It was my first time using an ebike – and it completely changed the way I thought about bikes and what they could do as a mode of transportation, not just for cyclists like myself, but for everyone.

My first ebike might be the best purchase I’ve ever made. Here are five reasons why.

A Real Car Replacement Tool For Everyone

I’m a cyclist – or at least I consider myself a cyclist. I’ve never owned my own car (the one car we do have is my wife’s car). When I want to get around somewhere, 99% of the time, I hop on two wheels and pedal my way there.

Here’s the thing though. I definitely bike more than the vast majority of people. Most people put in just a few miles of biking each year and most of it is probably recreational biking. I put in literally thousands of miles on my bike each year. As much as I like to tell people to try replacing some of their car commuting with a bike, the fact is, most people simply aren’t in a position – physically or mentally – to do that.

An ebike completely changes the game. Friction is the biggest barrier to getting started with anything. And the biggest barrier with biking is the fact that it requires some physical exertion. It can be a hurdle to get over that initial hurdle. An ebike, on the other hand, is so easy to use and requires so little work that it’s really not that difficult to get someone who isn’t a strong biker to start using an ebike.

The first step to replacing a car is actually replacing the car. And doing that means getting over that initial friction of putting yourself on a bike. When you know that the pedaling part isn’t going to be difficult, it gets much easier to start using a bike to get around.

They Can Cover Huge Distances

Bikes are amazing tools because of how they can shorten the travel time between two points, and in turn, open up more of your world. I’ve found that for most people, 20 minutes is about the maximum distance you can walk comfortably without feeling like it’s too far to walk. That’s about 1 mile on foot. 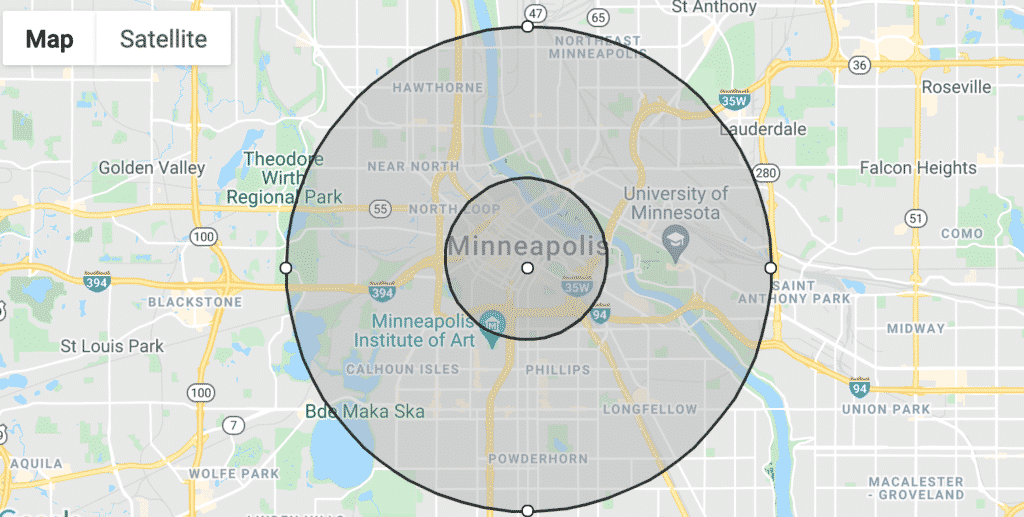 Take a look at how big the circle gets with an ebike. It’s pretty astounding. 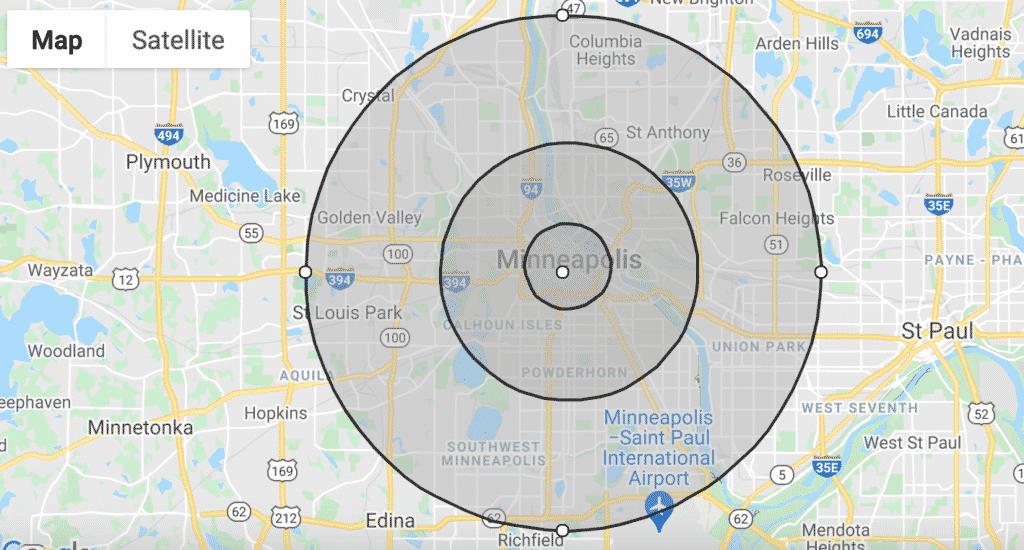 In a city like Minneapolis (where I live), an ebike essentially makes the entire city within reach for me. Not only that, depending on where I am, I can get to most of St. Paul and even get to some of the first ring suburbs – all within 20 minutes.

*Of course, some factors will slow down your travel time – these distances are measured as straight lines, and not all travel options allow you to go in a straight line. Still, I think it gives a good, general idea of how much ground you can cover on foot, with a bike, and with an ebike.

Maintenance Costs Are Far Lower Compared To A Car

We’ve gone over how far you can travel with an ebike, which, in short, is pretty incredible. Maintenance, however, is something that you have to think about.

What’s great about an ebike is that the maintenance costs aren’t much – typically a few hundred dollars per year assuming you take care of your bike. You’ll need to fix flat tires if you get them. Brakes and chains need to be replaced. You’ll need to take care of other issues here and there. You’ll also want to get your bike tuned up at a bike shop each year. But for the most part, these aren’t expensive things to handle. Contrast that with a car, where everything you do costs a ton of money.

The most expensive parts of an ebike are the electronic components, the most expensive of which is the battery. This will run you about $600 and depending on how often you use your bike and how well you take care of the battery, it should last you several years. In the grand scheme of things, this isn’t a terribly large expense, especially when you compare it to the cost of even minor car repairs.

The other electronic parts that can be expensive are the display and the controller. I’ve had to replace both of these on my ebike, with each replacement part costing about $100. Again, it’s not a terrible expense when you compare it to how much a car costs. And unlike a car, almost everything on a bike can be replaced over and over. Barring a huge crash that totals your bike frame, a bike can theoretically last a lifetime. You can’t say the same thing about a car.

The Cost Is Reasonable If You Think About It Right

The thing that makes a lot of people balk at an ebike is the cost. You can get entry-level ebikes in the $1,000 range, but most of the main ebike brands are going to cost you around $1,600 or so. This is a hefty upfront cost for most people.

But consider the alternative. The cheapest, crappiest car you can get will likely cost you more than $1,600. If you think of your ebike as just a bike that you ride every once in a while, then yes, it’s an expensive thing to buy. But if you think of it as an actual car replacement – something you use as a mode of transportation and not just as a thing for recreation – then $1,600 really isn’t a bad deal. You’re basically getting a vehicle that can take you around a city for the price of a really crappy car. And it won’t come with all of the maintenance headaches that a cheap beater car will probably come with.

I have multiple ebikes these days, and I use them as much as I can. They serve as my primary mode of transportation. I carry groceries using panniers. I’m able to carry my son by attaching a bike seat on the rear rack (it’s how I get him to daycare in the morning and pick him up in the evening). I even have a little dog carrier so I can bring my dog along if needed. And of course, I do all of my deliveries and gig economy apps using an ebike.

You Can Use Ebikes In The Suburbs Too

I think suburb biking has gotten better in recent years. Some suburbs have started adding bike infrastructure which makes the biking experience much more enjoyable. The problem, though, is you still have to deal with distances. In most suburbs, everything is miles away. You can bike, but it’s going to be a pain.

But go back to that section about distances and how far you can cover on an ebike. In a lot of suburbs, 6 miles is probably how far you may have to travel to get to commercial areas. Interestingly enough, that’s exactly within the easy biking range of an ebike.

Suburbs are car-dependent and aren’t really made for people like me. But an ebike might make it easier to close the distances between things in the burbs.

I’ve been very happy with my ebike, to the point where I’ve been going around accumulating more of them. There are a lot of different types to choose from. Cargo bikes that can carry a ton of stuff. Big wheelbarrow bikes that can fit even more stuff. Moped-style bikes that I’ve found surprisingly fun (I recently got the Himiway Escape, which is a moped-style bike that works really well for doing food deliveries).

Biking can be for everyone. If you aren’t convinced, go to your local bike shop and rent an electric bike for a day. It may convert you. And if you’re like me, it could one of the best things you ever buy.