For me, 2016 will go down as the first year I began aggressively saving for retirement.  It sort of bums me out that I’m getting into the savings game so late.  At 30 years old, I’m way behind my more financially literate peers, some of whom have already retired or established huge treasure troves of savings.  See folks like Millennial Revolution, Money Wizard, and Fiery Millennials.

To make matters worse, the vast majority of lawyers enter their first job with six-figures or more of student loan debt, requiring years to get back to a net worth of zero.  And while debt can often be avoided, the legal field sometimes makes it hard to do that. Stupid as it is, law is a profession built on pedigree.  The highest paying legal jobs base almost all of their hiring decisions on just three things: (1) how good your school is, (2) your first-year grades, and (3) your ability to be sort of normal in a job interview.  As a result, school choice matters a ton and you can’t always go to the cheapest law school.

If you think I’m getting a late start, it’s even worse for people like my wife (yep! my wife now – it’s weird to type that) who chose to pursue advanced careers in dentistry.  She ended up with four years of dental school, a one-year general practice residency, and now three more years of a specialty residency.  Add up those 8 years of post graduate training and she won’t even start her first real job until she’s 32 years old!  The real kicker is that, unlike doctor residencies, most dental residencies are unpaid or pay such a meager stipend that it might as well be unpaid. Mrs. FP – now also 30 – has essentially never earned a real income.  She’s been a student throughout her entire 20s.

The late start means it’s super important for people like me to save aggressively.  A standard 10% or 20% savings rate just isn’t going to cut it.

How Much Did I Save In Prior Years?

Here’s what my yearly savings looked like through 2015, along with my age during those years:

Ouch.  That doesn’t look so good.  In my defense, the amounts I saved for retirement in 2014 and 2015 were a deliberate choice.  Both of those years saw me pay over $40,000 towards my student loans.  If you include that as savings, the amount I “saved” in both of those years jumps quite a bit.

With that background out of the way, let’s jump into my 2016 savings.  For 2016 I was able to save into 6 different types of tax-advantaged accounts.  These included the following:

Not everyone will have access to so many different types of accounts.  My saving situation for 2016 was a little bit unique because I switched jobs in the middle of the year, moving from the private sector into the public sector. Doing this opened up a bunch of other retirement accounts that I wouldn’t have in the private sector.

In addition to my tax-advantaged savings, I also paid $15,740 to finish off the remainder of my student loans in 2016. 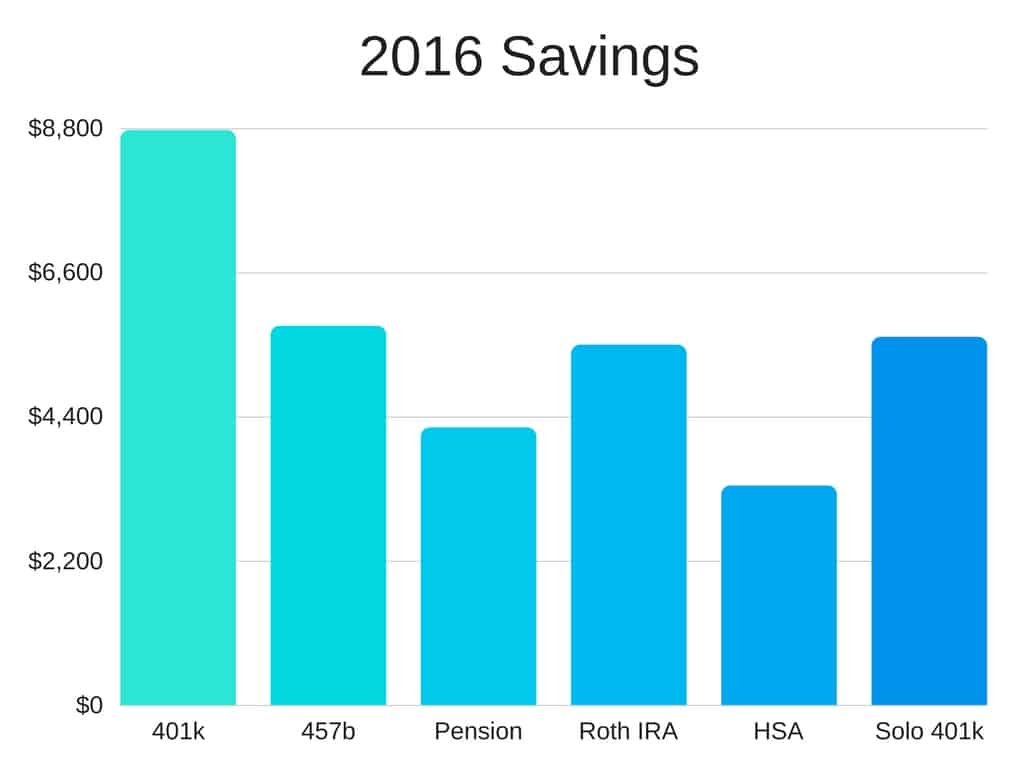 A couple of things to point out here:

My 401k contributions represent the amount I contributed to the 401k at my previous job.  At the beginning of 2016, I calculated the percentage I needed to save in order to max out my 401k by the end of the year, then left my 401k to its own devices.  When I left my private practice law firm job and moved into the public sector, I discovered that my new employer didn’t offer a 401k.  Hence, why my 401k contributions stopped in the middle of 2016.

While my new job doesn’t give us a 401k, it does give me access to two special tax-advantaged accounts that most people in the private sector won’t have.  The 457 is probably one of the best retirement accounts you can have, especially if you work for a government entity.  There are two reasons for this:

This basically makes it a tax-advantaged account with no downside.  My contributions for 2016 represent about half the year.  I started out slow with it and then beefed it up as I realized how valuable the 457 was.

My defined contribution plan is basically like another 401k.  The main downside is that I can’t change the amount I contribute to it.  By state law, I’m required to contribute 5.5% of my salary and my employer throws in 6%.

Nothing too special here.  I automate my Roth contributions so that an equal amount comes out of my bank account every two weeks.  This syncs up with my paycheck cycle.

Once Mrs. FP starts working, I’ll need to utilize a Backdoor Roth like Physician On Fire did this past year.  PoF has a great walkthrough on how to do a Backdoor Roth and it’s bookmarked for my future use.  For now, though, I don’t need to do anything special for my Roth IRA contributions besides just putting the money in.

I had a high deductible health plan for all of 2016, which made me eligible to contribute to a Health Savings Account.  This was spread out between two jobs.  My old employer’s preferred HSA provider was Fidelity, so I initially had my HSA contributions going in there.  I thought Fidelity was pretty good.

My new employer uses a company called Select Account, which seems fine to me.  It’s fairly inexpensive and they have Vanguard funds as well.  The only thing I don’t like is that I’m required to keep $1,000 sitting as cash.

By opening up a Solo 401k, I was basically able to create even more tax-advantaged space for myself and bank almost all of the 1099 income I earned that was eligible to go into a solo 401k.  This not only saved me a ton on taxes, but it also made it so that I essentially created a second IRA for myself.

If you want more info about solo 401ks, check out my previous posts on the subject.  This tax-advantaged account is a great way to reduce your tax liability when it comes to your side hustles, especially if you’re not able to fully take advantage of your 401k at work.

So, that’s what my savings picture looked like for 2016.  I was actually surprised at how much I ended up saving for the year, especially because I expected my savings to go down due to me taking a massive pay cut.

Here are a few things that come to mind after looking at all of this information:

If you haven’t already yet, I say to grab all your tax stuff and figure out exactly how much you saved in 2016.  It’s a good way to see if you’re still meeting your savings goals.

A great way to track your savings progress is to use an app like Personal Capital or Mint.  I use both of these apps every day to track my financial progress.  And best of all, they’re both totally free.